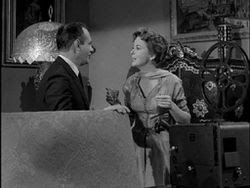 In an episode very reminiscent of Billy Wilder’s 1950 film Sunset Boulevard, aging screen actress Barbara Jean Trenton (Ida Lupino) can’t bring herself to realize that time has moved on, that her onscreen glory days have vanished. Day after day she sits in her private screening room, absorbed in the roles of her past. Her agent Danny Weiss (Martin Balsam) finds her a part in an upcoming film, but Barbara Jean refuses to play (gasp!) a mother. Instead she retreats further and further into her previous films, until... Well, you’ve seen this plot enough times to know what comes next.

“The Sixteen-Millimeter Shrine” is nostalgic without becoming hokey, largely due to strong, yet restrained performances by Lupino and Balsam, probably one of the stronger duos to appear in the show's first season (if not the entire series). Yet time has not been particularly kind to this episode. Again, we’ve seen this theme of the aging star trying to capture her former glory many, many times. For 1950s television, it was quite effective. Now? Not so much. Still a good episode, but not one of my favorites.

Interestingly, Lupino became one of America’s first female film directors, directing nine films and fifty television episodes. Just a few months after “The Sixteen-Millimeter Shrine” aired, Balsam appeared in one of his most famous roles, Detective Milton Arbogast in Alfred Hitchcock’s Psycho.
Posted by Andy Wolverton at 7:58 AM