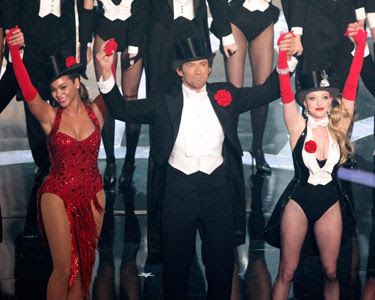 1. I watch the Oscars just about every year. I usually stay up for the entire thing, even if I have to work the next day.

2. I could care less who's wearing what or who's seen with whom.

3. I yell at the TV the same way I do when I'm watching football or baseball.

4. I read a book during the boring parts.

With that in mind, I thought Hugh Jackman did a great job, especially at the show's clever, entertaining, recession-conscious opening. Best of all, he didn't get in the way.

At first I really liked the previous actor/actress winners speaking brief tributes to the nominees, but it really got old when we got to the Best Actress nominations. But it was better than seeing the same old clips of the nominees we've been seeing for the past several weeks.

I also liked not hearing, "This is Joe Blow's seventeenth nomination and first win." You want to know that stuff, look it up.

Aside from Heath Ledger's universally acknowledged Oscar-deserving performance, the comic book guys mostly got snubbed. The Curious Case of Benjamin Button really had better effects than The Dark Knight or Iron Man? Really?

Just my opinion: Ben Stiller is not funny. Never has been. I won't say he never will be. There's always hope.

The films I most want to see are in the Foreign Language category.

I am very happy for Slumdog Millionaire. It deserved everything it won.

Sean Penn is a gifted actor. I just don't want to listen to him (or anyone) stand up there and talk politics. Accept the award, be gracious, thank the people you need to thank, sit down and then make another movie. I haven't seen The Wrestler, so I don't know if Mickey Rourke got robbed. (But if he did, I wouldn't want to be Sean Penn in a dark alley alone with Rourke.)

I saw Kate Winslet in The Reader and was underwhelmed. (Again, sorry, Dr. Phil.) I think the main problem perhaps wasn't so much with her, but that I thought the film was ordinary at best. Which brings me to Meryl Streep:

Let me say this as clearly as I can. Meryl Streep is not of this world. Her talent is immeasurable. She could (and perhaps should) win the Oscar every time she steps in front of a camera. She has won the Oscar before, a Supporting Actress Oscar for Kramer vs. Kramer and a Best Actress for Sophie's Choice, twenty-seven years ago. The fact that she's still competing twenty-seven years after her last Oscar is tremendous.

The Best Actress category is often the toughest place to be on Oscar night. A brief look at who Streep has been up against:

In 1981, Streep's performance in The French Lieutenant's Woman blew Katherine Hepburn (On Golden Pond) out of the water, but for sentimental reasons (including the ill health of Hepburn's co-star Henry Fonda), Hepburn won.

Streep (Silkwood) lost to Shirley MacLaine (Terms of Endearment), a very good performance by both ladies. In 1985, Streep (Out of Africa) lost to Geraldine Page in The Trip to Bountiful. I loved Bountiful, much more than I enjoyed Africa, but you could make a case for either actress that year.

1988 - A Cry in the Dark, loses to Jodie Foster (in the mostly forgettable The Accussed)

1990 - Postcards from the Edge, loses to Kathy Bates (Misery)

1998 - One True Thing, loses to Gwyneth Paltrow (Shakespeare in Love)

(Streep was also nominated for Best Supporting Actress in 1978 for The Deer Hunter and in 2002 for Adaptation.)

The thing is, for most of the last several years, Streep has been nominated for films that just weren't that good. Most of the roles she takes are not commensurate with her talent. She elevates each of her roles, even in the bad films, but how much can you do when you're in The Bridges of Madison County?

Streep will win again, I'm convinced of it. I haven't yet seen Doubt, so I can't say with any degree of assurance that she should have won this year. But I have my suspicions.

I felt bad that Charlton Heston got so little applause when his name and pictures appeared in the "In Memoriam" portion of the show. Again, forget the man's politics and give him his credit for starring in some great films.

All in all, not a bad show. I think I'll have that extra cup of coffee now.
Posted by Andy Wolverton at 9:15 AM

You're right: Streep is one of those actors (Samuel Jackson is another) who love to work enough to take roles in mediocre (or in Jackson's case, downright bad) movies. The only one of those Meryl Streep roles I'd give her the Oscar over the actual winner was One True Thing, not because that performance was so great but because the competition wasn't either. But as perfect as she was in The Devil Wears Prada she was up against Helen Mirren in the role she was born for.

Ben Stiller will never be funny, at least not in any way that is unique to him and worthy of recognition. There are a dozen actors who could do his shtick.

I have reservations about defending a mediocre movie, Benjamin Button. And I should probably think twice about going against two genre giants (Dark Knight, Iron Man).

But ... I thought Benjamin Button's CGI effects were its strongest asset, and that the award was well deserved.

Most CGI effects call attention to themselves. Not Button's. They were seamlessly integrated into the film, so much so that you can't tell where they begin and end. To me, that's craft and deserving of acclaim.

Good point, Kelly. In all fairness, I should reserve judgment on Button until I've seen it as I have Iron Man and The Dark Knight.