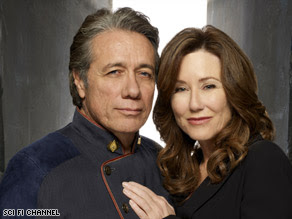 Apparently it was Battlestar Galactica Night at the UN last night. Yes, that UN, the United Nations. Several of the writers and actors from the show met UN representatives to discuss human rights issues, terrorism and more. (Can anyone say "Frak"?) Read all about it here.

Battlestar Galactica in its 2003-to-the-present incarnation (The original series, for all you young kids, aired in 1978.) on the SciFi Channel has been an excellent show, often spectacular. As an avid follower, I will be sad to see the series end this Friday night. It was a great ride.

And in not-so-great a move, The SciFi Channel will change its name in July to "SyFy." I kid you not.

(Thanks, T, for sending me the article!)
Posted by Andy Wolverton at 9:06 AM

They need to post the transcript from this event. i09 posted a report and it sounded very interesting.

That's the equivalent of Pepsi changing to Pepsee. Sigh. Further proof that SciFi doesn't really want to be the science fiction channel, because then people might think they're weird or something.

That's a great picture of you and Cindy, by the way.