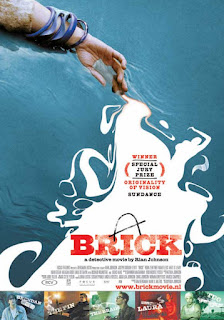 Brick is one of those films that probably should never have happened. But I’m so glad it did.

Brendan Fry (Joseph Gordon-Levitt) is a Southern California high school student who discovers his ex-girlfriend Emily lying dead at the edge of a sewage tunnel. Although their relationship didn’t end well, Brendan makes it his mission to find out who killed Emily. Doing so will take him on a quest through various social groups in his school, an unrelenting vice principal (played by Richard Roundtree, the original Shaft), a gauntlet of tough guys, and ultimately landing him face-to-face with the local drug lord referred to as “The Pin.”

The film owes a lot everything to film noir, a genre that was already dead before any of these actors were even born. Noir has its own rules and most of them revolve around character and style. The makers of Brick have obviously spent a lot of time and effort getting those elements right, although the film’s scenes take place mostly in high school hallways and parking lots rather than smoke-filled bars and jazz joints. 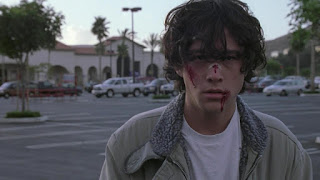 Like lots of films noir, Brick is filled with fights, but fights adorned with clever noir dialog. Just before one fight with the school’s top football player, Brendan taunts the jock, who always responds with, “Yeah?” Brendan finally has enough: “There’s a thesaurus in the library. Yeah is under ‘Y.’ Go ahead, I’ll wait.” And just before another fight with a stoner: “Throw one at me if you want, hash head. I’ve got all five senses and I slept last night, so that puts me six up on the lot of you.”

Since noir is more concerned with character and style than it is with plot and nice, neat resolutions, the average viewer might walk away disappointed or confused. Brick certainly has a plot and a resolution, but I don’t think those are director Rian Johnson’s primary concerns. Classic noir (generally from the post-WWII 1940s to roughly 1958) was full of character and style and sometimes contained well-structured plots and resolutions, but not always. (See The Big Sleep from 1946 and tell me what sense you can make of that.) Films that are more neo-noir (Chinatown, Body Heat, even more current sf-noirs like Dark City and Donnie Darko) have an even darker, often postmodern tone, rarely giving audiences full resolution or hope. Brick is a perfect marriage of the style, speech, mannerisms and motivations of classic noir in a neo-noir setting. Again, this shouldn’t work, but it does, largely because everyone involved in the film takes it seriously. There’s irony here, but little other humor, no tongue-in-cheek, no spoofing and no gags. To state it simply, the plot and resolution of a noir film doesn’t have to be believable to the audience, but it’s essential that the characters believe it. In Brick, they do, even if the audience doesn’t. The level of courage and faith required to make such a film in 2005 is tremendous. If you buy into it, the film works. If not, I wouldn’t worry too much about it; there are (unfortunately) few films out there like Brick.

Brick was made for about half a million dollars and grossed over $2 million at the box office. Not bad. Not great, but not bad. I don’t know the DVD sales figures, but either from a monetary or an artistic viewpoint (or maybe both), Johnson went on to make 2008’s The Brothers Bloom and the recent hit Looper. If Brick is any indication of Johnson’s talent and vision, I’ll be glad to follow him for the long haul. Brick is definitely worth two hours of your time and is currently streaming on Netflix.