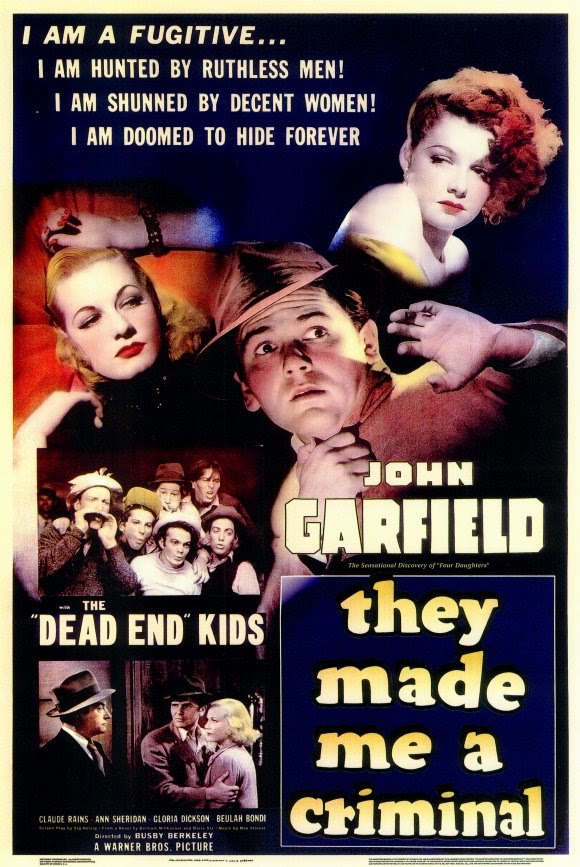 With all the talent associated with They Made Me a Criminal, it should be a much better film. For starters, you’ve got Busby Berkeley - a man who made his name with a long string of hit musicals - directing. Next, you have John Garfield in his second major film, Claude Rains in a supporting role, and James Wong Howe as the film’s cinematographer.

Yet They Made Me a Criminal isn’t a very good film, even for 1939. Heck, especially for 1939, American cinema’s golden year. Garfield plays Johnny Bradfield, the lightweight boxing champ who projects a squeaky-clean image for the public, yet behind closed doors, is up to major shenanigans. One night, during a party in Bradfield’s Manhattan apartment, a man is accidentally killed. Although Bradfield had nothing to do with it (since he was out cold drunk), he gets the blame. The cops think Bradfield died in a car accident trying to evade the law, but he secretly sneaks his way out West, where he meets up with some reform school rejects and a beautiful woman named Peggy (Gloria Dickson).

The plot is filled with holes, the script is littered with hokum and nearly every aspect of the story is telegraphed way in advance. (And if you’re a boxing fan, you’re in for some disappointment. There are boxing scenes, yes, but nothing at all memorable.) About 10 minutes of The Dead End Kids was enough to last a lifetime, but otherwise the performances are certainly better than the material.