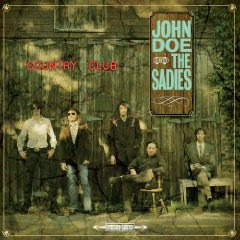 I'm crazy about Terry Gross and her show Fresh Air on NPR. Yesterday I heard her talking to John Doe about his new album with The Sadies called Country Club. Previously I knew nothing about John Doe or The Sadies, but after Gross played a couple of cuts from the album, I knew I wanted to hear more. So I used part of my birthday credit on iTunes and got it.

Here's a conversation stopper: When people ask if you like Country Music, tell 'em, "Yeah, I like anything before 1970." (It's like telling anyone north of the Mason-Dixon line that you're from Mississippi. Silence reigns.) I really do like "classic" country and with Country Club, Doe and The Sadies pay homage to that era. Most of these songs are covers, but with a contemporary feel. I know that's no real description, but I've only listened to the album once thus far, so you'll either have to take my word for it or buy it yourself.

These songs, unlike most country I hear today, are brutally honest. They aren't cute, they're about bad things happening to bad people and bad things happening to good people. Many of these songs are songs you've heard before: "I Still Miss Someone," "Take These Chains from My Heart," "Detroit City," "Help Me Make It Through the Night" and others. Normally when I hear a cover, it makes me want to forget the current incarnation and pick up the original. That's not happening here. As I said, there's an obvious homage to the original, but also an exploration into something new. Definitely worth your time, especially if you're fed up with current "country" music.

So Terry Gross has done it to me again....
Posted by Andy Wolverton at 6:04 AM