Close Encounters of the Third Kind (1977) 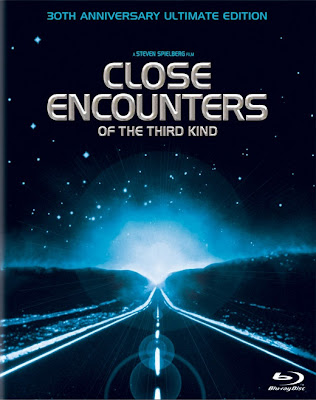 In 1977 my fifteen-year-old world came a little closer into focus. At least I thought it did.

Like everyone else of my generation, I went to see Star Wars in the summer of 1977. I’d never seen anything like it; no one had. I enjoyed it tremendously and might have even gone to see it twice, but it didn’t really grab me, refusing to let go. It was just another movie to carry me from the end of my first bumbling year of high school into a hopefully more focused, determined sophomore year.

My Holy Grail in those days was music. It sounds juvenile now, but I wanted to become the best trumpet player in the state. The measure of that for most folks in Mississippi was being accepted into the Lions All-State Band. Auditioning consisted (and probably still does) of a two-step process: if you pass the first audition, you move on to the second round.

I hadn’t passed the first round in 1976. Back in those days, you never knew your ranking; you either made it or you didn’t. And I didn’t.

Over the next year I’d worked hard and felt like I had a chance of making it past the first round. I auditioned early that Saturday and felt pretty good about it, so good that I decided to treat myself to a movie. When I saw the poster with the long dark highway stretching into the star-filled horizon, there was no doubt which movie I’d see.

Close Encounters of the Third Kind captivated me in a way that Star Wars simply couldn't. Sure, Richard Dreyfuss was not as good-looking as Mark Hamill or Harrison Ford, but he was me. Roy Neary was searching for something and he simply wasn’t going to be denied. He was driven, obsessed, out-of-control in pursuit of his goal, his dream. I don’t think I was out-of-control, but I was certainly driven, maybe even obsessed with my music.

But the film did more than confirm that I was searching for something. It filled me with a sense of wonder. I’m no longer driven by the need to be a great musician, but I am still filled with wonder and every time I watch Close Encounters, I’m filled with wonder all over again.

I recently watched the film on Blu-Ray and couldn’t get over how good it looks and sounds. Yes, it was filmed in 1977, so you’re going to see some grain, but you’re also going to see exceptional detail. When you see Ray’s sunburn, it no longer looks like a bit of paint slapped onto Dreyfuss’s face. The desert scenes make you feel like you’re right there. And the Devil’s Tower scenes? Wow. You just have to see them.

The 30th Anniversary edition contains the original 1977 theatrical release, the 1980 theatrical re-release and the 1997 director’s cut, all on one disc. The packaging even includes a fold-out map detailing the differences between the three versions.

And if you’re into extras:

Steven Spielberg: 30 Years of Close Encounters (22 min.)
Storyboard to Screen Comparisons
Photo Gallery
Making of Documentary (1997, 97 min.)
"Watch the Skies" (1977, 6 min.)
Deleted Scenes (approx. 10 min.)
A View From Above (which informs you which scenes are present in one or more of the three editions)

Highly recommended!
Posted by Andy Wolverton at 8:16 AM

Great post, Andy. And now it seems I have to get a Blu-Ray player.

All these years later, and I am still struck by how Spielberg was able to convey a sense of SIZE with the ships in the original release. On the big screen -- and presumably in HD with Blu-Ray -- the color saturation of both the alien ships and that big board at ground zero made it all seem real. Although typical First Contact scenarios are more like the prime number pulses of Contact, the music theory "lessons" of CE3K remind me a lot of the math theory exchange between Guardian and Colossus in The Forbin Project -- they "seem" a well thought out alternative.

Footnote: the term Close Encounters of the Nth Kind was developed by Northwestern University astronomy prof J. Allen Hynek. It was my interest in astronomy and Hynek's books about evaluating evidence of UFOs which prompted me to apply to NU in the first place. NU's Integrated Science Program was housed on the second floor of Dearborn Observatory for many years, and Hynek had an office on the first floor, so we met from time to time. In the ground zero meeting, he's the Colonel Sanders looking scientist puffing on a pipe, gazing contemplatively at the mother ship.

It's been TOO long since I've seen this movie and now I really want to buy the blu-ray. I remember loving it but somehow I never picked it up (probably because I saw it on video and then DVDs were coming out...ah you know how it is!)

You've just provided me with the first compelling evidence I've seen that I should finally get a Blu-Ray player.

Okay, I just went to look at my ThankYou points and I had enough to get this beauty for free. So I ordered it. Now I get to watch for the mailman.