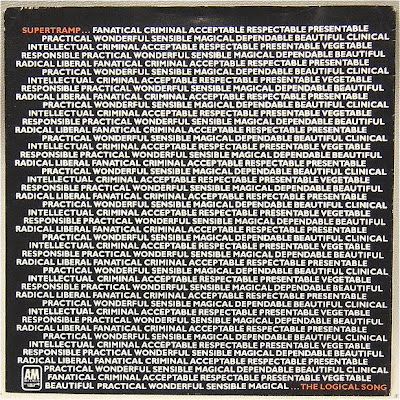 A few days ago, as I was driving from the airport to my Aunt Margaret’s funeral, “The Logical Song” by Supertramp came on the radio, a song that never fails to bring a smile to my face. Maybe that’s because when I bought the single (cover pictured above) in 1979, I thought all the strings of assonances in the lyrics were cool or maybe it was the sound of a Mattel electronic football game in the background. Or maybe just because it was a fun song.

I began thinking about how the song really does summarize how we’re expected to grow up and be all the things mentioned in the lyrics: sensible, logical, responsible, practical. If we’re not careful, we can have all the fun in life beaten out of us, finding ourselves in jobs we can’t stand, stuck in social rock-climbing, planning on retirements where (if we’re lucky enough to have saved enough money in this economy) we can finally do something we enjoy. If we can remember how.

From the song’s chorus:

There are times when all the world's asleep,
the questions run too deep
for such a simple man.
Won't you please, please tell me what we've learned
I know it sounds absurd
but please tell me who I am.

Not knowing who you are can be a real danger. Years pile up and you can reach that place not even knowing how you got there. In the midst of this somewhat goofy, quirky song from the 70s, Supertramp is laying some real wisdom on us.

On this same trip I was reading a book by Gary Thomas called Pure Pleasure: Why Do Christians Feel So Bad about Feeling Good? Thomas reminds us that pleasure in and of itself is a good thing. God designed it and wants us to enjoy it, but not to be consumed by it. Both Thomas and Supertramp remind me that I can take pleasure in something as seemingly trivial as comic books (or, if you’d like it to sound more socially acceptable, “graphic novels”).

Lately I’ve enjoyed a return to the comics world, largely due to my friends Trip and Sam (Hey, Cindy: blame them!) as well as my local gateway, Third Eye Comics in Annapolis. I’ve found that returning to old superhero favorites (Spider-Man, the Fantastic Four, Batman and my current favorite Daredevil) or new ones (Hellboy) or non-superhero titles (Y: The Last Man, Global Frequency, and the brilliant Neil Gaiman/Dave McKean collaboration Signal to Noise), comics hold just as much wonder and fascination at age 48 as they did at age 8.

Apparently I’m not alone. The majority of customers I see at Third Eye are in their mid-20’s or older, most of them around my age. So what happened? Did we never grow up?

The owner of a shop I frequented in Germantown, Tennessee in the late 80s summed it up: “It’s words and pictures, man, words and pictures. It’s the best of both worlds.” I think he’s got something. It’s a combination of two things I love: the written word and images. It’s a combination that’s hard to resist. Is it sensible, logical, responsible, practical? I don’t know. It certainly may sound absurd, but it’s who I am.
Posted by Andy Wolverton at 6:03 AM