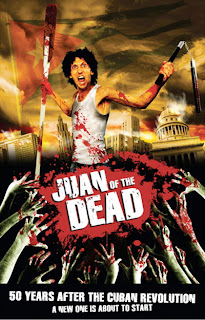 As a zombie movie, there’s really not much to Juan of the Dead, but as a comedy, it has some great moments. In Castro’s Cuba, the Zombie Revolution has broken out. Cuban TV news commentators spin the rise of the dead as a political revolution or a mass of dissidents, but Juan - who, while fishing, saw a zombie rise up from the Gulf of Mexico - knows better. 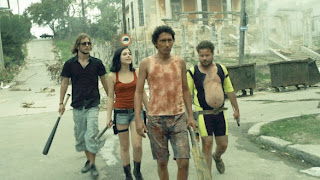 Juan and his friends spend most of their pre-zombie days hanging around Havana doing nothing. The best thing in Juan’s life is his daughter Camila, who wants nothing to do with him. No problem, he thinks; she’ll come around. There’s always plenty of time in Cuba, right?

There’s no sense of urgency with Juan or his friends, even when the zombies start to attack. Even then, Juan and his buddies have no idea how to deal with them. Crosses? Silver bullets? Wooden stakes? (Did these guys ever watch any movies? You get the impression that Castro didn’t allow too many horror flicks into Cuba.) Juan even gets the idea that he and his buddies could make some money from this, sort of a poor man’s Ghostbusters, only with zombies. 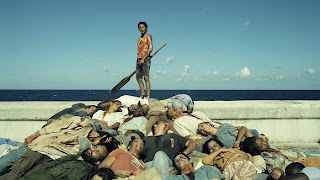 Juan of the Dead is often a fun ride and much of its humor (though often crude) works. Much of it is satirical and I’m probably missing a lot not knowing enough about Cuban culture, but I found myself laughing more than I thought I would. Unfortunately, the film meanders frequently and is about 10-15 minutes too long, with an ending that feels contrived. Yet Juan (the film and the character) has an unmistakable charm that can’t be denied. Worth a look.

Posted by Andy Wolverton at 6:11 AM