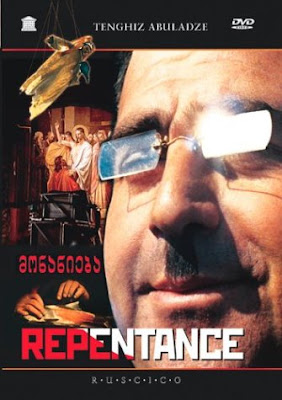 Georgian director Tengiz Abuladze's film Repentance is one of the most amazing, fascinating and disturbing films I've seen in years. (I have to give credit to Cindy for discovering it, mentioned in a book by Philip Yancey.) I'm sending it back to Netflix today, wishing I didn't have to.

After burying his father (the former mayor of a small Georgian town), Abel Aravidze settles into his large estate for what he hopes will be a night of much needed rest. It is far from restful. Aravidze awakens to his wife's screams. She's looking at something outside their bedroom window. That something is Aravidze's father's corpse, leaning against a tree.

The situation would almost seem comic, yet we know it's not. Mostly from flashbacks, we learn that Aravidze's father was not only the mayor of their small town, he was a tyrannical mayor, for all practical purposes a ruthless dictator. And someone refuses to let the man's earthly remains rest even for one night.

I won't tell you any more of the plot; you'll have to see it for yourself. What I will tell you is to expect a challenging, thought-provoking and utterly unique film experience with Repentance. Director Abuladze uses many surreal touches, non-linear storytelling and black humor in telling this amazing story. The film was apparently banned in the Soviet Union for three years, first appearing at the 1987 Cannes Film Festival, where it unanimously won the Grand Prize of the Jury. Rightfully so. Repentance is a film not to be missed.
Posted by Andy Wolverton at 10:07 AM