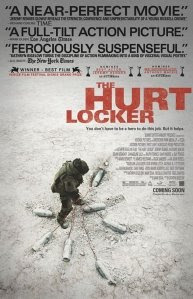 Chicago Sun-Times film critic Roger Ebert is very enthusiastic about the new film The Hurt Locker. Apparently he's also sick of defending his scathing review of Transformers: Revenge of the Fallen, which Ebert calls "a horrible experience of unbearable length, briefly punctuated by three or four amusing moments. One of these involves a dog-like robot humping the leg of the heroine."

In his review of The Hurt Locker, Ebert says,

“The Hurt Locker” is a great film, an intelligent film, a film shot clearly so that we know exactly who everybody is and where they are and what they’re doing and why. The camera work is at the service of the story. Bigelow knows, unlike the pathetic Michael Bay, that you can’t build suspense with shots lasting one or two seconds. Frankly, I wonder if a lot of “Transformer” lovers would even be able to take “The Hurt Locker.” They may not be accustomed to powerful films that pound on their imaginations instead of their ears.

Reading this review makes me glad that most book and short story reviewers (at least the ones I read) aren't so scathing. Which brings me to my next point:

I got a rejection letter a couple of days ago for a new story I sent out for the first time. I looked over the story and decided that it's bad. Very bad. Embarrassingly bad. It won't go out again, not without some major revisions. Sometimes your own evaluation of your work can be just as scathing as that of a critic. Only this time I'm thankful only one other person (I hope!) saw it. Have a good weekend, whether you are revising or not.
Posted by Andy Wolverton at 6:02 AM