Twilight Zone Season One: "Where Is Everybody?" 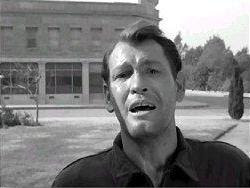 A man (Earl Holliman) is seen walking through a deserted town. He doesn’t know his name, how he got there or where he’s going. He just wants to find someone, anyone, to talk to. Signs of other people are everywhere: a jukebox blaring in an abandoned cafe, a movie projector running in an empty theater, a freshly lit cigar in an ashtray at a police station desk, a telephone ringing in a phone booth. The man can’t help the feeling that he’s being watched.

It seems ridiculous to raise a spoiler alert to a show that’s half a century old, but I can’t bring myself to give away the ending. It’s an ending that probably carried more impact in 1959 than it does now, yet it still works. What doesn’t work is the man’s constant (and unnatural) commentary on what’s happening to him. (It’s a lesson that Serling would learn and use to his advantage in later episodes.) “Where Is Everybody?” is essentially a one-man show and while the subject matter was somewhat fresh fifty years ago, seeing the episode now is a bit unsatisfying only because we’ve seen "The Last Man on Earth" scenario so many times since. Yet Holliman’s performance contains a certain warmth and charm that’s hard to deny.

“Where Is Everybody?” was TZ’s pilot episode, the show that would either sell the series to the network executives or stop it cold. It was far from the best episode to air (even in the first season) and in many ways uncharacteristic of most of the episodes that would follow. But imagine what might have happened (or not happened) had the pilot episode been “The Monsters Are Due on Maple Street” or “Long Live Walter Jameson.” “Where Is Everybody?” did what it was supposed to do: it persuaded CBS to give Serling the green light. After that, there was no turning back.
Posted by Andy Wolverton at 5:46 AM

I spent an hour today reading the Wikipedia articles on various episodes. What impressed me was that not only did I know most of the episodes, that the "good" ones didn't fall into just one year, or the early or late shows -- there's quality all through the whole series.

But I guess I knew that. (grin)

Google The Twilight Zone Museum for some fun stuff. I've been having a great time there.

Yes, quality is scattered throughout the 156 episodes. The great ones more than make up for the mediocre ones.