TZ Season One: "One for the Angels" 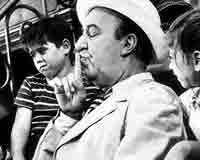 A sidewalk pitchman (“salesmen” we would call them now) named Bookman (Ed Wynn) is approached by Mr. Death (Murray Hamilton), informing him that his time on Earth has come to an end. Bookman begs for a little more time, until he can make one last masterpiece pitch, a big one, one for the angels. When Mr. Death feels he’s been cheated, he threatens to take, instead of Bookman, an eight-year-old girl.

Again, no spoilers, but “One for the Angels” suffers from Mr. Death being inconsistent and in some ways not very smart (unless you consider his actions part of his overall scheme). The episode also suffers from being too sweet, too sentimental, yet its heart is in the right place, allowing Serling to reflect on death and self-sacrifice, themes he would frequently revisit.

Marc Scott Zicree claims that veteran actor Wynn suffers from not portraying a convincing, fast-talking pitchman. I think that’s really the point: Bookman isn’t very good at what he does. He’s not a fast-talker and he’s not an effective salesman. (He even gives some of his products away to children early in the episode, evidencing both his failure as a pitchman and his generosity.) His inadequacies make his quest for the Big Pitch all the more improbable. Yet when the Big Pitch comes, it’s neither convincing to us nor should it be to Mr. Death. (Again, this could be part of Mr. Death’s plan, but I think I’m reading more into the episode than is actually there.)

While far from the best Serling would serve up in the show’s first season, “One for the Angels” is still enjoyable. It’s also fun to see a young Murray Hamilton playing Mr. Death. Hamilton would gain far more attention as Mrs. Robinson’s husband in 1967’s The Graduate and as the mayor of Amity Island in Jaws.
Posted by Andy Wolverton at 5:48 AM