Genesis plays on a familiar sf trope: What if robots began to develop their own conscience? Anax is a young woman seeking admittance into the prestigious Academy, but first she must pass a series of examinations. These exams serve as a way to fill us in on the backstory of an island republic that’s sealed itself off from the world by means of a Great Sea Fence. One of the early defenders of the island named Adam disobeys one of the republic’s directives and is imprisoned with an android. This historical event forms the basis of Anax’s “thesis” if you will. What follows is lots of philosophical discussion about man, robot, free will, etc.

Genesis feels like familiar ground for good reason: we’ve been there before with Isaac Asimov, Philip K. Dick and others. Therein lies the problem. I’m not the most well-read sf reader out there, but early on I had an idea about how the book might end. I’d hoped I was wrong, but I wasn’t. If you’re new to the genre, you might enjoy Genesis. Otherwise, this is probably one republic you’ve already visited.

Everyone seems to be anointing When You Reach Me as one of last year’s best novels for children, maybe even the best. While I was intrigued by much of the book, narrated by a sixth-grader named Miranda, I wasn’t completely caught up in it. Set in New York City in 1979, Miranda is fascinated with Madeleine L’Engle’s A Wrinkle in Time, a fascination that seems to drive the story in some ways, ways perhaps even Miranda doesn’t understand. The novel is really about friendship and relationships (its strongest point, in my opinion), but there are also weird things at work: mysterious notes left for Miranda, a new weird boy in her class and a strange homeless man hanging out near a mailbox.

The problem for me was that Miranda wasn’t more fascinated about what was going on around her. She takes it all these strange happenings as rather routine, which, after reading A Wrinkle in Time, seems very unlikely. An enjoyable read, but I’m certainly not ready to say this was the best children’s book of 2009. 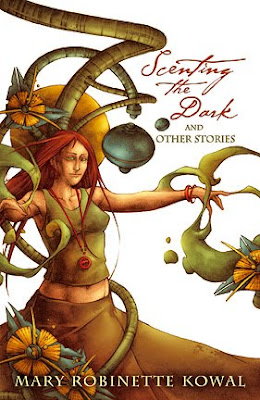 Scenting the Dark and Other Stories (2009) - Mary Robinette Kowal

My fear is that with each passing year, fewer and fewer people seem to be talking about Theodore Sturgeon. Maybe it’s just where I am and the circles I move in, but I certainly hope Sturgeon is not in danger of being forgotten. This odd psychological tale of a disturbed soldier with a horrific secret is a real page-turner, although the letter format of the first several pages gets rather tiresome. Some sections of the novel seem quite dated, but the unsettling sense of unease Sturgeon creates is remarkable.

It’s always fun to revisit the comics of my youth. I once owned most of these original issues of the Fantastic Four (issues #41-62 plus Annuals #3 and 4), so the otherworldly Kirby artwork was familiar, yet still pretty awesome nearly 40 years after I’d first discovered it. What doesn’t always hold up are Stan Lee’s stories, but you have to consider what most comic writing was like at the time. It’s still fun to watch the characters develop and the progression of some of the most ground-breaking art in comics.

This short, interesting book examines several of the major American comics from Marvel and DC Universes, focusing on their spiritual aspects. Chapter themes and topics include Evil, Justice, Vigilantism and more. Although the thrust of the book is comics and graphic novels, Garrett includes some discussion of movies (most of which are film versions of comics/graphic novels). I only wish the book had gone into a little more depth, but it’s a good starting point.

Elmore Leonard seldom disappoints. Heck, maybe never. It's rare that I read Westerns, but Leonard's writing (and especially his dialogue) is so good, you forget you're reading a Western. A masterful storyteller. There's a dying scene that's written so well, so poignantly, you'd think Leonard actually died to see what it was like so he could write about it.

Writer Warren Ellis presents a team of superheroes doggedly determined to combat an international terrorist and his army. It’s amazing to think that these original issues appeared pre-9/11. The artwork and coloring are astounding. This is one of the few graphic novels I want to revisit soon.

After reading Lemire’s Tales of Essex County Vol. 1, I had some idea of what The Nobody would be like: sparse drawings, atmospheric renderings of small-town life, odd characters. Yet The Nobody captivated me in a way that Essex County did not. I won't be able to articulate exactly how until I read it again, and maybe not even then.

A man walks into a small Canadian fishing village wrapped in bandages, very much like The Invisible Man. The townspeople are understandably suspicious, all except for a teenage girl who feels strangely drawn to the man. The Nobody did not go where I expected, which in itself is refreshing. Definitely worth a look.

That's it for January. Now go and read something.
Posted by Andy Wolverton at 8:36 AM