More Graphic Novels...When Will It End???

Graphic Novel Mania continues here on the blog these days... I just finished the first volume in Brian K. Vaughan's Y: The Last Man - Unmanned. Yorick Brown - an escape artist with a pet monkey - just wants to be with his girlfriend in Australia when a plague hits that wipes out every male on Earth... except for Yorick. (His monkey is male too, if you want to get technical.) That would be a bad enough day in itself, but Yorick is attacked by a radical group of Amazons celebrating the destruction of men, gun-wielding wives of Republican representatives and more. The violence does get graphic, but the book is also filled with laugh-out-loud moments. 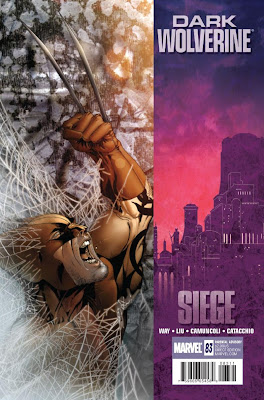 I've also just learned that my friend and Clarion 2004 pal Marjorie M. Liu is now writing Dark Wolverine. (She actually started with issue #82 if I'm not mistaken.) Since this is part of Marvel's The Siege series, I'll be sure to pick this one up.
Posted by Andy Wolverton at 6:57 AM