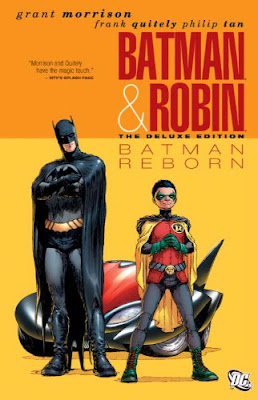 If you haven't been keeping up with Batman lately (and no, watching The Dark Knight doesn't count) you might want to brush up on your Batman Encyclopedia or at least check out his Wikipedia articles. You learn early on in Batman Reborn that this is not your typical Bruce Wayne/Batman adventure. This one's got some serious family baggage that might leave you scratching your head, at least initially. But the essentials get explained without becoming a huge infodump.

This Batman and Robin hit the ground running (or rather flying, in an airborne Batmobile), tackling Toad, then moving on to a whole onslaught of villains, most of whom were new to me. The danger, the violence and the stakes are raised with the turn of just about every page as Morrison does a masterful job of not only providing great fight scenes but also adding depth to the characters and their situations. Commissioner Gordon isn't really sure this is a Batman he can trust, but he's placing his confidence in him anyway. This new Robin? He's not so sure about him... Even Alfred has his doubts. And as for the citizens of Gotham, well... Let's just say things are heating up.

Are these guys even worthy to wear the costumes of Batman and Robin? Are they any good? What is good? What is evil? Who's on the right side and what is the right side? Is there even such a thing as a right side? These were questions explored in the film The Dark Knight, but certainly not exhaustively, for Morrison is able to get added mileage out of them, pushing things further and further as the end approaches. And it is quite an end. Highly recommended.
Posted by Andy Wolverton at 7:05 PM