The Weight of Silence (2009) - Heather Gudenkauf 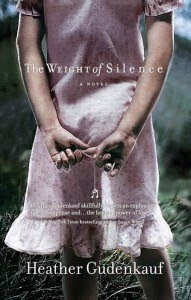 The Weight of Silence (2009) by Heather Gudenkauf is currently up for an Edgar Award for Best First Novel by an American Author. There's lots to like in this gripping tale of seven-year-old girl named Calli, a selective mute who goes missing. Calli's best friend (and interpreter) Petra has also gone missing, setting into motion a powderkeg of pent-up tension, angst and all sorts of family drama.

Gudenkauf tells the story from multiple points of view: Calli's, Petra's, members of their families, and law enforcement officials. With each point of view, we learn more of the relationships between these characters, the baggage they've carried for years, their hopes, dreams and disappointments. Although there are several of them, the point of view changes work because they strengthen both the family tensions and mostly (except when the reflections on the past run a little too long) drive the plot along.

In fact The Weight of Silence works better as a family drama than it does as a mystery. As the book progresses, you soon figure out that there are very few choices as to who has abducted the girls. (Or were they, in fact, abducted?) When it arrives, the solution provides little satisfaction. (Telling you why, at this point, would reveal too much. The book contains many characters, but far too few are really capable of committing the crime[s] involved.) Once the culprit has been identified, the loose ends are wrapped up far too conveniently, so much so that character integrity suffers. The sequence of events that unfolds during the last forty pages just feels far too manipulated.

Still, I like Gudenkauf's writing style and would definitely read more of her work in the future. If you're looking for a mystery that leans more toward family drama, give The Weight of Silence a try.
Posted by Andy Wolverton at 5:28 AM