Zona, Writers of the Future and (of course) More Books

Cindy and I got back last night from visiting my mom in Arizona, where for some crazy reason my allergies decided to go nuts. But Mom's doing well, Cindy and I got to watch the Greyhound races and I got to go to Half-Price Books (where I picked up a nice hardcover of Charles de Lint's Tapping the Dream Tree and a not-so-nice (but good enough for reading) copy of Robert R. McCammon's They Thirst.

On the plane, I finished Glen Hirshberg's excellent collection The Two Sams and got about 75 pages into Cormac McCarthy's Blood Meridian. Man, what a tale that is.

When I got home to check my mail, I finally got something from Writers of the Future. I guess it's good news – I've made the quarter-finals a number of times, but this time I reached the semi-finals. Progress, I suppose.
Posted by Andy Wolverton at 3:24 PM 6 comments: 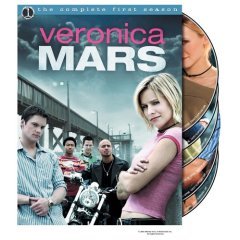 Posted by Andy Wolverton at 7:23 PM No comments: 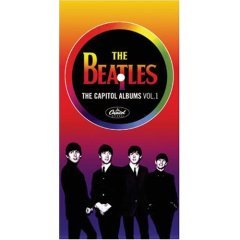 Posted by Andy Wolverton at 7:22 PM No comments:

Veronica Mars, The Beatles and Cranium

Just finished watching Veronica Mars Season One on DVD. I didn't really have very high expectations for the show early on, but I was surprised. I definitely recommend the show's first season, mainly for the strong characters. (And the actors aren't bad.) The writing is pretty good overall, although a careful watcher can frequently figure out what's going to happen by the end of most episodes. (Hey, if I can, most of you can.) Still, the show held several genuine surprises and was quite entertaining.

With the release of the Beatles' The Capitol Albums Vol. 2 this past week, I decided to buy Vol. 1 first. For those of you old enough to remember, the Capitol recordings from 1964 were different in several ways from their British counterparts. This set includes the first four Beatle albums released in America: (Not counting A Hard Day's Night and The Beatles Story) Meet the Beatles, The Beatles' Second Album, Something New and Beatles 65. Now I'm not enough of an audiophile to know what makes Capitol's "fake stereo" fake; all I know is the discs sound great to me. (They're presented on the discs in both stereo and mono.) I haven't heard some of these versions in fifteen or twenty years and it really takes me back. I've been playing these suckers non-stop.

I'm glad they added the American version of Help! (with the full version of the title song) to Vol. 2. Help! also includes some of the actual orchestral soundtrack, which the British version does not. I wonder if Capitol will do the same with the Yellow Submarine album.

Part of this return to Beatlemania is the result of a party Cindy and I went to yesterday. One of the guys there is a huge Beatles' fan, but he's quite a bit younger than me. I was able to give him some "I was there when it happened" perspective on British version vs. American versions, the "death" of Paul and the pros/cons of Wings.

At this very same party, a group of about twelve of us played Cranium. I was on the guy team, which got smoked by one of the girl teams. You know, one girl can draw a curved line on a pad and the rest of their team correctly guesses The Leaning Tower of Pisa. Either that or they can name tunes in one note. And then I have to hum all the verses and choruses to "Hotel California" (including the drum parts on my knees) and they still don't get it. Guys just can't win.

And my wife won the game on a question about rap music!

That's messed up.
Posted by Andy Wolverton at 6:55 PM 2 comments:

Nationals Home Opener...Wake Me When It's Over

I just knew from Dick Cheney's lousy throwing out of the first ball (It didn't even make it to the plate...and he was standing WAY out in front of the mound.) that the Nationals' home opener was going to be a bust. They lost 7-1 to the Mets in a real snoozer. Things got interesting in the final inning with the bases loaded. Ryan Zimmerman came up to bat for the Nationals, but there were already two outs. He added another and the game was over. At least Placido Domingo sounded pretty good on the National Anthem. And the weather was great.

It's nice to get back to writing some short fiction. I've got a story that needs another three or four days before it's ready to send out.

Cindy and I are going to the home opener for the Washington Nationals tomorrow. I listened to part of the Nationals/Astros game on the radio this afternoon. The broadcasters said to come to tomorrow's game early because of heightened security. Seems that Dick Cheney's going to throw out the first pitch. I guess it'll take awhile for security to check the Vice-President's shotgun.
Posted by Andy Wolverton at 7:16 PM 2 comments:

Looking forward to a great weekend, the first Cindy and I have spent together in four weeks (thanks to Navy Band tour). Maybe a little walk along the B&A Trail will be in our future if it's not raining. (Bullet could use a little encounter with nature.) Might even have time to read a little this weekend.

Speaking of reading, the DC Writer's Way reading was well-attended last night. (I'll probably have some pictures up later.) Three of the members of my workshop read and all did a great job. I read a portion of "Results May Vary," which is an expanision of Jeff Ford's 900-word exercise at Clarion.

It's hard to believe another DC Writer's Way workshop has finished and it's time for a reading. Anyone who has been to any workshop (or just anyone) can come and read tomorrow at 6:30 PM in the Langston Room at Busboys and Poets, at 2021 14th Street NW Washington DC. Looks like a very cool place.

For some of the members of my workshop, this will be the first time they've ever read their work in front of an audience, but I think they're all ready. (Of course I have no idea what I'm going to read.)