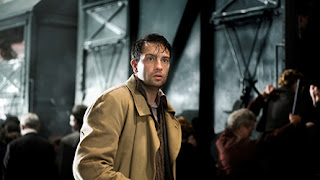 Süskind (2012) - Rudolph van der Berg [1:58]
(In German and Dutch, with English subtitles)
Early in Süskind, a man views himself in a series of vertical mirrors, seeing intense anxiety and dread looking back at him in each reflection. The man is Walter Süskind (Jeroen Spitzenberger), a theater manager in 1942 Amsterdam, a man who shows that same anxiety-ridden face to hundreds of Jews every day. Süskind (a German and a Jew) is desperately trying to keep himself and his family from deportation by the Nazis to a German transit camp. In order to remain in Amsterdam, Süskind agrees to work for an SS officer named Ferdinand aus der Fünten (Karl Markovics), a position that might make a difference in helping Süskind save (or hide) as many Jews as he can. 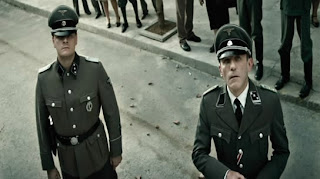 Hoping that Fünten is a man who can be reasoned with, Süskind attempts to establish not quite a friendship, but rather a relationship that might prove beneficial to both men. Süskind understands that while Fünten is a man who might listen to him, he’s unlikely to approve any action that might jeopardize his own position. But the theater manager soon realizes the odds are stacked overwhelmingly against him. The best he can hope for is falsifying or burning identification cards in an effort to save as many children as possible. The adults he can do little to help.
Fünten is under pressure to keep the number of Jews moving out of Amsterdam constant and uninterrupted. Süskind seeks to meet the quota by fudging the numbers without getting caught. Both men experience revelations during the film, moments that awaken them to truths they’d rather not acknowledge. 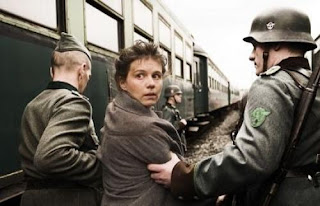 Rudolf van der Berg’s film (based on actual people and events) offers no easy answers. We know that Süskind simply cannot save everyone and many of the scenes that portray this reality are truly gut-wrenching. Yet van der Berg never stoops to melodrama as we might expect. Instead, he gives us a series of tense situations that cannot be wrapped up neatly but often overlap, creating an agonizing dilemma for Süskind no matter where he turns.
In Fünten we find a Nazi who is not a cardboard stereotype, but rather a man of conflicting thoughts and feelings. We may hate him, but we know there’s a level of turmoil going on in his soul. What he’s going to do with that turmoil, we’re not quite sure until the film’s ending. Spitzenberger, Markovics and the entire cast deliver solid performances in what is often a well-paced, gripping drama. While the last third of the film is not quite as effective as the first two-thirds, the final product is both strong and memorable. Süskind is not currently available on DVD in the U.S., but keep an eye out for it in art house theaters and on future DVD releases.
4/5