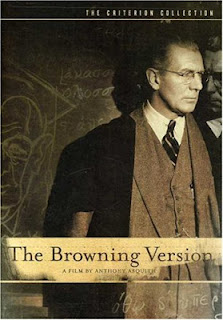 You could say that The Browning Version is the best film ever made about teaching, which may be true, but that’s too narrow a field for consideration. You could also say that the role of Andrew Crocker-Harris is Michael Redgrave’s finest performance. That also would be too narrow a field. Despite its inclusion in the Criterion Collection, both the performance and the film - now over 50 years old - are in danger of being forgotten. Sort of like that teacher you had many, many years ago....

Based on a 1948 play by Terence Rattigan, The Browning Version centers on Andrew Crocker-Harris (or, as his students refer to him behind his back, “The Crock”), an aging classics teacher at an English boys’ school. Early on, we see that Crocker-Harris is stern, strict, demanding in his subject, and largely despised by everyone, including his cheating wife (Jean Kent). Others, including the headmaster (played exquisitely by Wilfrid Hyde-White) simply tolerate him. 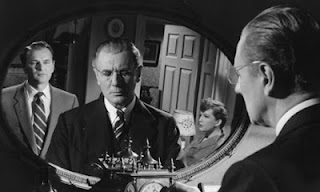 Yet all of that seems beside the point now. Crocker-Harris, in poor health, plans to retire and move away soon, hoping a change will help. What he doesn’t know is that in following him, his wife will have to abandon her lover (NIgel Patrick). If she leaves with him.

During his last day on the job, Crocker-Harris has an encounter with one of his students that causes him to reexamine his life and career. In the midst of this encounter, we meet Gilbert (Ronald Howard), Crocker-Harris’s successor, observing to get a feel for the students. After class, Crocker-Harris, in a soul-bearing monologue, tells Gilbert,

“Of course I failed, as you will fail 999 times out of a thousand. But passing your success can atone and more than atone for all the failures in the world. And sometimes... sometimes I had that success.” 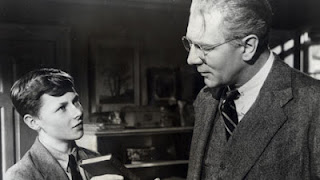 I’m well aware that one of the reasons I connected with this film is the fact that I was a teacher for 15 years. I understand much of what Crocker-Harris is going through, knowing that the balance often seems to tip in favor of failure (on the teacher’s part) rather than success. But it goes beyond that. The Browning Version transcends what could’ve been an exercise in melodramatic drudgery into an exploration of the human condition that contains depth and beauty. And Redgrave's performance is superb. It’s a fine film you shouldn’t miss.

The title refers to a translation by Robert Browning of Agamemnon, an important element in the film.

(The Browning Version was remade in 1994 with Albert Finney in the starring role, directed by Mike Figgis.)

Posted by Andy Wolverton at 5:54 AM